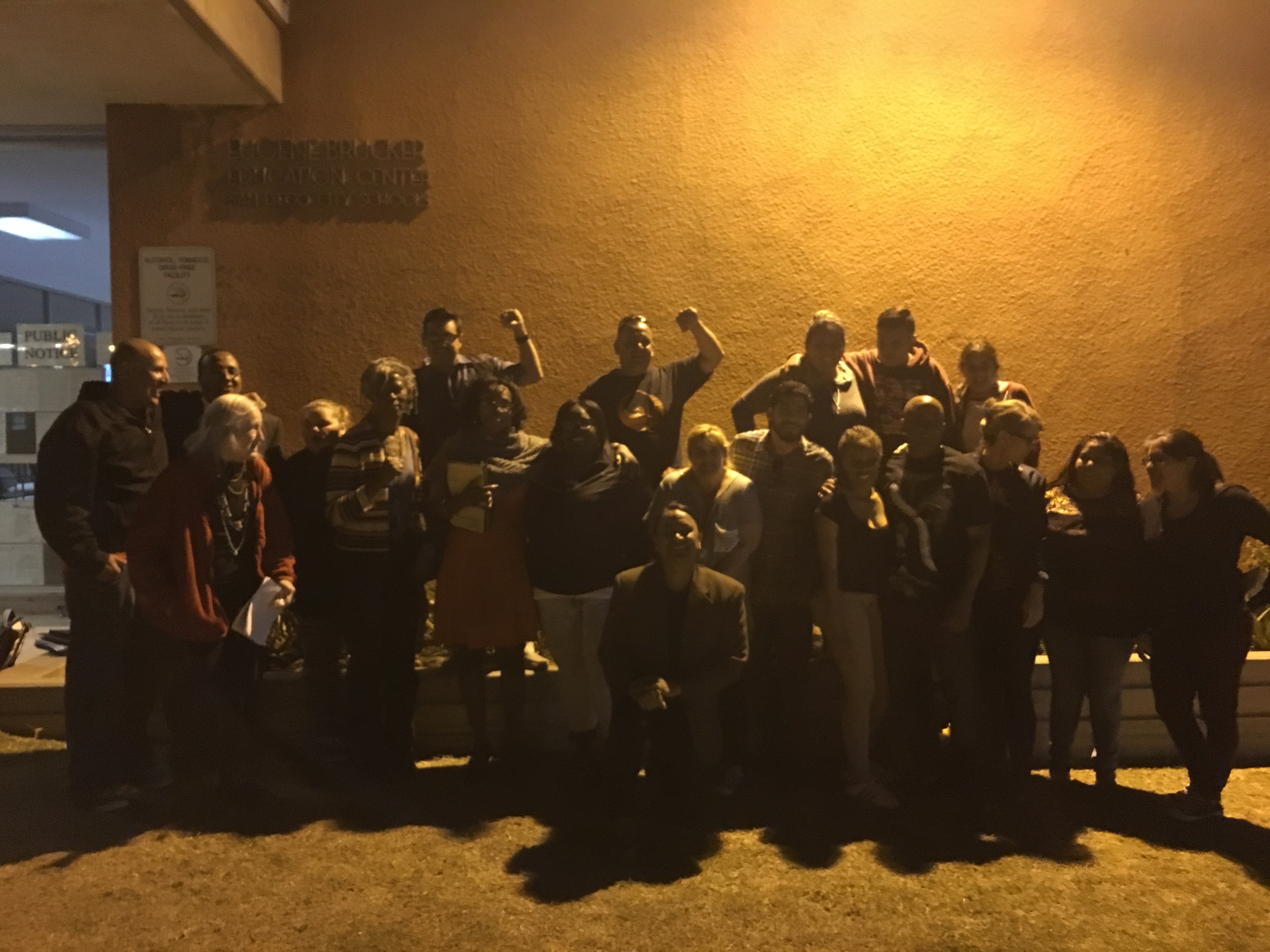 Thanks to the work of the Ethnic Studies Now Coalition, educators, activists, parents, and community members, San Diego Unified School District Board (SDUSD) voted unanimously to fund Ethnic Studies TK-12th grade at the April 12, 2016 Board meeting!  CA-NAME members in San Diego are elated about this recent vote and will continue to support the Ethnic Studies Movement in San Diego.  There is much work to be done educating, advocating, and moving forward.  If you would like to get involved, please contact Tricia Gallagher-Geursten at [email protected]

On June 9, 2015, the Board of Education of the San Diego Unified School District (SDUSD) approved a resolution for an Ethnic Studies Advisory Committee to begin meeting immediately to “develop recommendations as to how ethnic studies can be implemented and accessible to all students in the San Diego Unified School District throughout their K-12 educational experience.” Why ethnic studies and why is this curriculum important for all of our youth in San Diego?

The support for ethnic studies in K-12 schools in California has been growing for the past few years. Briefly, ethnic studies is the interdisciplinary study through social science, history and literature of how different populations have engaged in and experienced building what is now the United States of America. Although the student population of San Diego Unified School District is extremely diverse representing many ethnic groups and more than 60 languages and dialects, our social science, history and language arts texts and curriculum are not reflective of this diversity.

Dr. Christine Sleeter has analyzed California’s Social Science Framework for Public Schools as well as major textbooks and finds an alarming gap between the real diversity of California’s students and the people students see, read about and read from in these textbooks. For example, despite our state’s diversity, Dr. Sleeter found that “in history/social science [textbooks], representation of whites ranged from 41-80 percent, African-Americans from 2-28 percent, Latinos from 0-4 percent, American Indians from 1-10 percent, and Asian-Americans from 0-8 percent.” Compare these percentages to the 2014 student demographics in San Diego Unified School District: 23 percent white, 10 percent African-American, 46 percent Latino, .3 percent American Indian and 3 percent Asian-American.

Ethnic studies courses serve to close the gap between the students’ personal experiences and the skills and knowledge they acquire in school. When students see themselves reflected in what they are learning, their experiences in school become more meaningful helping them to engage more deeply in school. The research shows this to be true: Students who take ethnic studies courses show increased academic engagement, academic achievement and personal empowerment. Ethnic studies also has a positive impact on cross-racial understanding. In 2011, Ogo Okoye-Johnson analyzed 30 studies and found that a multicultural curriculum that is part of a school’s regular program has a more powerful positive impact on students’ racial attitudes than extracurricular cultural programming.

San Diego Unified School District, along with other districts across the state, is leading California toward inclusion of this powerfully impactful curriculum for our K-12 students. A similar proposal for all California districts, AB 101, is now on it’s way to the governor’s office. AB 101 instructs the superintendent of schools to establish an Ethnic Studies Advisory Committee beginning the school year of 2016-17. The advisory committee will make recommendations to the board on issues related to ethnic studies. The superintendent will then submit a plan to the board to fully implement an ethnic studies curriculum for all California high schools.

We support AB 101 because developing ethnic studies programs in all of our state’s public high schools is an integral part of cultivating a classroom and social environment that is accepting of diverse cultures and challenges students to become thoughtful consumers of information. It is vital for young people to learn about the many different histories and contributions of Americans, while also feeling like they can change their communities in positive ways. This bill will help close the achievement gap by reducing student truancy, increasing student enrollment, reducing dropout rates and better preparing Californian youth to be college-prepared, career-ready and social-justice oriented.

Chapman, Ph.D., of San Diego, and Gallagher-Geurtsen, Ed.D., of La Jolla, are with the California Chapter of the National Association for Multicultural Education, San Diego regional network.